I’ve been scrolling through old blog posts tonight and oh, what fun it is to see what we were up to back in the good old days!  Among those old memories, I found this post about what may have been the first year my kids went to VBS with their homeschool friends.  I had completely forgotten about this post until tonight…

June 14, 2010 (full post here)
I have spent the last hour sitting at our church browsing the internet in peaceful quiet except for the music from my blog that I am enjoying.…..

Where are my little noisemakers kids, you may ask?  The answer to that question is why I am feeling a little guilty.

This morning, I dropped all three kids off at another local church for Vacation Bible School.  The older kids were invited by some of our homeschool friends who attend the church, so I don't feel too bad about them.  D, on the other hand, is just going because the older kids went and because I thought a week of mornings to myself might be nice.

Okay, that is a giant understatement!  As a matter of fact, when I told my Mama that D could go to VBS at a church where I am not teaching this year, I told her that I didn't know what I would do with myself, but it would probably include a few minutes of sitting somewhere just drinking in the silence!

I guess I feel guilty because I have never thought of using church as a babysitter before.  My children have been in VBS all their lives and they have even gone to VBS at a church where I wasn't teaching, but always because they have friends there.  Maybe I am just splitting hairs, I don't know.  I am just going to take consolation in the fact that my friends who are members there don't seem to be bothered.

We are again in the middle of VBS week at that same church and those kids who invited my older kids are all now in the youth group and they are still inviting my kids … only now Lora and James aren’t just going to VBS, they are helping.  This has become one of my kids’ favorite weeks each summer.  This is James’ first year to help, and I have to say that he has been looking forward to it since the end of last year.  Lora is spending this week helping in the same class that she will be teaching in our church’s VBS next month.  Thanks, Marie!

I would be remiss in posting about this particular VBS without mentioning that Marie is an amazing VBS director … I won’t say that she makes it look easy, since I know how much time and passion she puts in to making this week a success, but she does make me want to be a better VBS director!

It is only Tuesday, but James has already learned a lesson that makes the entire week worthwhile … he told me on the way home that he now knows why we sometimes yell raise our voices when we say we aren’t mad … sometimes you have to raise your voice to get the attention of a child who is intent on NOT paying attention.  Nothing like a little bit of frustration to make an excellent teacher for my young man.

And yes, I am secretly gloating, but only a little!

I do have one confession, though.  I worried all those years ago about using another church’s VBS as a babysitter so that I could enjoy some peace and quiet.  I am over that.  But I did feel a twinge of guilt when I walked Daniel in on Monday morning and I saw the frazzled look on Marie’s face just moments before I walked out to enjoy my morning alone.

Just a twinge … but, I got over it about the time I settled on the couch with a cup of coffee, my Bible, and complete silence ... ahhh!
Posted by Jennifer at 11:57 PM

Oh that was just a momentary frazzled look replacing the continuous panicked look!
Which looks better on me? Frazzled or panicked? I'd like to show my good side, you know. 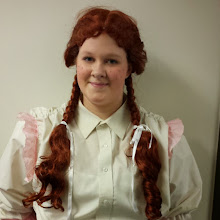 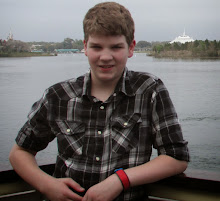 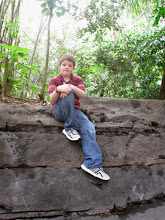